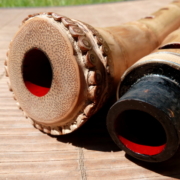 For the last two years, I’ve been studying the making of ji-ari thanks to all the restoration work on fine flutes I was entrusted with. My goal until now was to be able to produce good ji-ari shakuhachi with non-madake French bamboos.

Here are then the last two ji-ari that I made which I feel satisfied with the result and want to go on improving.

This 1.8 Ji-ari shakuhachi in D required a whole year of work…!
A lot of ji layers and hundreds of hours of measuring, testing, adjusting. I had to correct the tone-holes because the shrinking of the bore was so intense (up to 1cm in some parts !) that it required modification in my holes placement.
I realised on this flute my first home-made brazed silver rings enriching the rattan.
I recently had very positive feedbacks on this instrument from my master Gunnar and all the friends from the Chikumeisha France group.

The second one is a 2.2 in B flat made for Alain, my most diligent student ! The bamboo is clear and bright with a nice curve and is beautifully proportioned even though it has more nodes than what is expected to be.
This flute has a beautiful deep and bright tone.
For the joint’s rings, I wanted to go for an idea I had to spread silver powder on black shiny urushi. I like the finishing even if the technique has to be refined.
This new ji-ari is again quite a success that stimulate me to go on in this direction.

Next to come s a new 1.8 in progress on which I’m experimenting to inlay silver strip around the utaguchi horn inlay.

Back to work !
Scroll to top