Blog - Latest News
You are here: Home / flute / Last restoring at the workshop 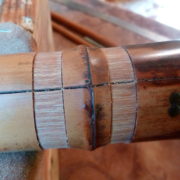 On the last weeks, I worked on restoring Alain’s flute. 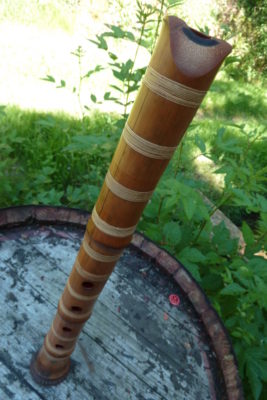 It’s a Ji-ari nobekan 1.6 Tozan about 100 years old !
A flute he bought 20 years ago in an antique shop in Geneva; they found this flute in Kyoto.

I don’t have much informations on the maker Enzon Kyozon (supposedly writer of a book on Shakuhachi making); if anyone has information on that maker, please contact me.
I like his Hanko.

Here follows the details of the repairs I did on this Shakuhachi.

The flute was not in playing condition when he brought it to me; it has been previously repaired (several times I guess) but still had several bad cracks going through the bamboo until the bore. Utaguchi was damaged with a chip on the side and the dark red Urushi lacquer was cracked in different places of the bore. 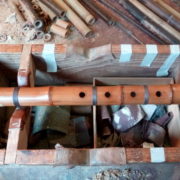 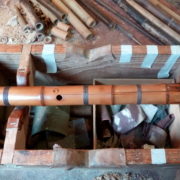 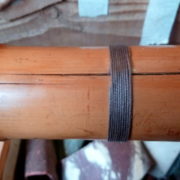 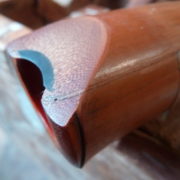 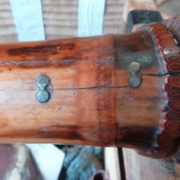 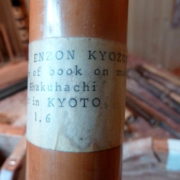 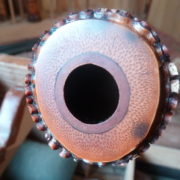 I first had to fill the chip on the embouchure with a mix of bamboo powder and glue and then reshape the utaguchi.

Then, I inlaid bindings with a rattan finishing on the whole body of the flute which was 12 bindings 10mm wide; a good opportunity for me to practice this very meticulous technique !
The splits were previously closed after a long humidification (except one which was previously filled with glue). The bindings comes after that to prevent re-opening of the cracks; they are strengthened with urushi and rattan comes over it.

Here are step by step pictures :

As the bamboo presented a nice patina due to its age, I chose  to ‘age’ the rattan with a diluted layer of transparent urushi; I find the result aesthetically coherent.

the filling process of the cracks in the bore needed three new layers of dark red Bengara urushi. 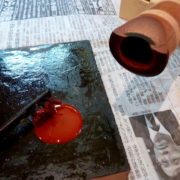 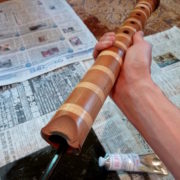 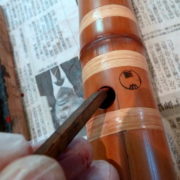 Finally this old Shakuhachi is ready for a new life !
I feel great pleasure and honour to give its voice back to abandoned instruments.

Back from London
Scroll to top